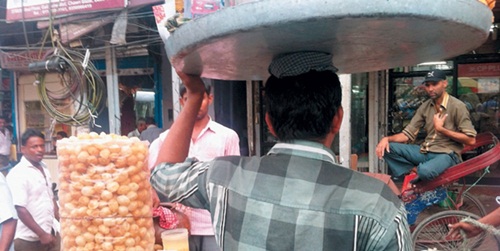 Morning, Delhi. Hot air blows at you from all directions. The city greets the traveler with its sagging electric cables and autowallahs with missing teeth who, while waiting for customers, in just couple of minutes can engage in a fight, sing a Hindi song and create a splash of water while drinking from the street side tap.
Delhi is on the move: endless right-sided flow of vehicles accompanied by sounds of horns and people’s shouts. Nobody seems to observe the traffic rules: neither the bus driver whose bus carries a group of construction workers who pass loud comments on what’s happening on the road, nor the scooter driver who carries his whole family on his small scooter – his wife and 2 children.

Delhi is not in a hurry: drowsy policeman, people lying on the grass and sitting near hundreds of stalls filled with street food, shoes and souvenirs. Little beggars surround European-looking tourists offering them to buy some small items of questionable quality. The foreigners try to wave them off. One tourist stays back and, in order to please the street kids, takes out some sweets and juice packets. His generosity attracts attention from older kids. Now they also follow the white man: if he gave sweets, he might also give ten rupees. Dozens of eyes follow the foreigners. You never know what to expect from them. Only later you realize that this attention comes not from animosity but from curiosity. You ask them the way and in a quick second you will get a lot of advice, wishes and questions.

It seems that only road accidents can distract the locals from watching the foreign tourists: the street then becomes a theatre stage and everyone plays a role in this show. Some people swear that they saw whose fault it was, two others are trying to prove otherwise, they are followed by relatives and friends of the drivers. The show lasts for about half an hour. Everyone is at fault, but no one is guilty. Everyone goes home with some damage. It would be much worse if the accident involved a cow. You could be beaten up for that so you could end up in a hospital. Yet no one is bothered that these sacred animals became inhabitants of disposal dumps. They eat garbage, plastic bags, they grow ugly humps and their sight causes pity instead of awe.

It remains completely incomprehensible, how this country manages to have such a high GDP. Opening industries for private and foreign investments allowed increasing FDI from 28 bln USD to 63 bln USD. India has already overtaken USA and China in terms of FDI. How do they do it?

When Mr Pankaj Saran, Ambassador of India to the Russian Federation, was suggesting where we should go and whom we should talk to, he had repeated a few times that we will see poverty and misery in India, however India is much more than that: “This is a country with young population, a lot of ambition, state-of-the-art industries and modern technologies.” This statement is also echoed by Mr.Bhaskar Sarkar, Executive Director of EEPC India (Engineering Exports Promotion Council, a premier trade and investment promotion organization in India): “22% of total exports in India are exports of engineering products and technologies, in which MSMEs contribute up to 35%. It is more than 70 bln USD, in absolute terms.” Main consumer of engineering products and services from India is USA – more than 3.5 bln USD.

— This situation will not change until India and Russia will start cooperating at the level of MSMEs. We know about large companies in Russia but have limited knowledge of medium and small enterprises, – explains Mr.Sarkar. – We had a similar situation with Japan 3 years ago. After the delegations from both countries started exchanging visits, mutual ties started building. 110 Indian companies will visit INNOPROM exhibition in Ekaterinburg, out of which 80% are MSMEs. The labour in India is cheaper than in Russia, we have own raw materials, fully developed production sites with complete infrastructure, that is why it is easier to start up production here. We are interested in investments and technologies.

Government organizations that are engaged in promotion of Indian brands and technologies see building up a competitive advantage of Indian MSMEs as their primary objective. They realize that India cannot compete with China in terms of volumes of production; therefore, the main focus is on individual approach and customized solutions.

We do not depend on anyone

We headed towards Bangalore to have a look at such solutions. In this city, called the Indian Silicon Valley, 60% of all machine tools in the country are produced. Half of this number is manufactured by Ace Micromatic Group (the pioneer in the field of many high technology products). This is the largest manufacturer of metal-cutting machine tools equipment in India: its production capacity is 4,000 units per annum. The company plans to increase this number to 10,000 units by 2020.

The Director of the company Mr. Srinivas Shirgurkar takes us around the facility – from warehouse to machine assembling workshops – to show us everything in detail. What we see here is completely different from what we saw on streets: modern buildings, state-of-the-art equipment, hundreds of ‘blue-collars’ that efficiently manage the computerized process. The Director of the company is proud that all their products are designed by their own indigenous specialists: “We do not depend on anyone and we are not bothered about any sanctions”. He is honest about the quality and competiveness of their products: “European machines are first in terms of quality, and then come Japanese and Korean machines. Our products are comparable to Japanese and Korean machines in terms of quality but at a much cheaper price”. Their products are exported to China, Europe, and Turkey. Russia’s share is less at the moment – 100 machines. The buyers are Rosselmash and Agat. The machine components are first send to Perm, Russia, then the machines are assembled at Ural-Instrument-Pumori and after that they are sent to the end-customers. The company intends to present its new CNC machine at INNOPROM and look for potential partners to enter new markets in Russia.

Indian Space Research Organization (ISRO) is also based in Bangalore. Founded in 1969, the organization is one of the six largest space agencies in the world. ISRO maintains one of the largest fleet of communication satellites and remote sensing satellites. Application fields: Geographic Information Systems, broadcasts, weather forecasts, disaster management tools. ISRO also develops heavy lift launchers, human spaceflight projects, and reusable launch vehicles. They are very familiar with names of Soviet engineers and Russian space rocket launch sites. Russia and India share a successful history of cooperation in the field of space research. Year 2015 marked the 40th anniversary since the launch of first Indian satellite called Aryabhata from Soyuz launch vehicle. On this occasion the space agencies of both countries signed an MoU which is bound to give boost to expansion of cooperation in the field of space research and peaceful use. This cooperation will include rocket and missile engineering and engine-building as well as development of space vehicles. However, as of now this is just a declaration as there is no dedicated financing for joint projects. ISRO hopes for execution of decision for development and implementation of GLONASS/GPS based Navigation Satellite System in India. The final agreement on this is expected to be reached during the meeting of Presidents of both countries by the end of this year.

…behind the fence that separates the space agency from the city street, two schoolboys wearing their schoolbags are eyeing the Russian journalists. Summer holidays in India do not last longer than one and a half month and start in May. “I would love to work here”, – says the older one. “I would also want to be a Russian’, – his younger friend understood him in a different way.