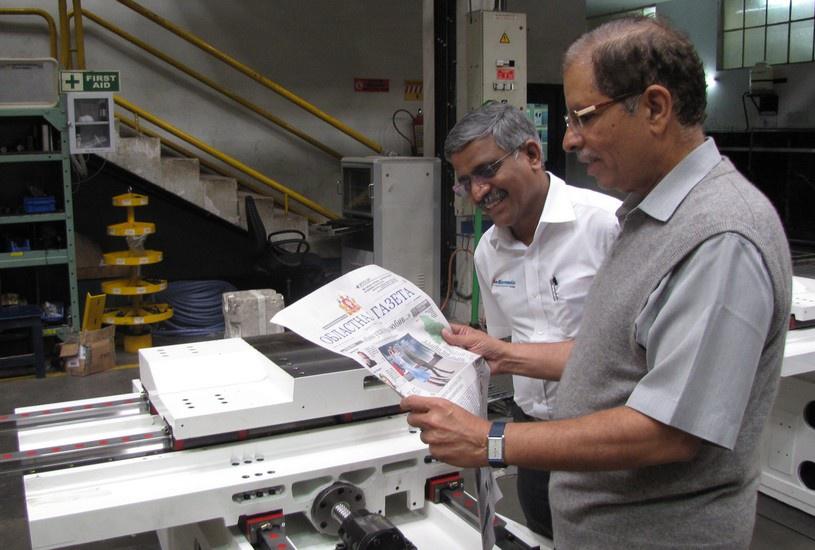 Before going to INNOPROM, Mr Srinivas Shirgurkar (on the right), MD of ACE Designers Limited, the machine tool manufacturing company from Bangalore, studies the Urals newspaper in his production workshop: his company will present the latest Russian-Indian CNC machine at the exhibition. Photo credit: Olga Koshkina.

The main industrial exhibition of the country – INNOPROM 2016 – will start in a week in Ekaterinburg. This year more than 700 products will be displayed at this exhibition from 17 countries of the world. India, the partner-country of this event, will bring a delegation that consists of representatives from several ministries and more than 100 companies from major Indian states.

Today “OG”starts with a series of articles dedicated to India. Before the exhibition we have visited 3 Indian states. In 3 days we were able to visit industrial enterprises of Delhi, Pune and Bangalore, take a ride in Delhi metro and try to ride a cycle rickshaw, walk around the slum areas and modern areas of the cities. Today we will tell our reader about the work of industrial enterprises in India.

What can India offer us?

The Moscow-Beijing-Delhi ‘Strategic Triangle’ today is taking its real shape. The tangents of the three countries have met in Ekaterinburg twice. Seven years ago the capital of Urals had welcomed the Presidents of BRIC and SCO (Shanghai Cooperation Organization) countries. This year India picked up the baton from China and became the partner-country at INNOPROM. India has already reached and even surpassed China in terms of rate of economic growth and FDI.

Just in few decades, India from being a country that lagged behind, has grown to be the 4th top steel producer in the world and the 2nd top manufacturer of two-wheelers in the world and has become a production base of high-technology machines and equipment. Currently, engineering products and technologies make 20% of the country’s total exports, and one third of the total number is supplied to the international markets by MSMEs. Most of the products are exported to USA, Europe and China. Unfortunately, Russia’s market is not the largest in this field.

– In the last few years trade between our two countries has significantly reduced. In order to change this trend, we need to facilitate mutual cooperation between the Indian states and the Russian regions, – says Bhaskar Sarkar, Executive Director of EEPC India – a premier trade and investment promotion organization in India with a membership of more than 12,000 engineering companies. –80 percent of the list of INNOPROM participants consists of MSMEs. At the moment we only know about large Russian enterprises but we have very limited knowledge of medium enterprises.

The potential clients from Urals are offered two lines of cooperation. Firstly, they can make India their production base: the country offers an abundance of raw materials, skilled specialists and cheap labour as well as production sites with built-up infrastructure. Secondly, India can offer customized solutions. India cannot match China in terms of volumes of production, but provide customized solutions – this is India’s forte.

Whole plants can be exported

The production facility of Ace Designers limited consists of two workshops: the equipment is assembled in this workshop and tested in the next one. All employees are Indians. The company does not employ foreign specialists. Photo credit: Olga Koshkina.

Almost all Indian companies that will take part in INNOPROM are oriented towards highly customized manufacturing. Ace Designers Ltd, the machine tools manufacturing company, is one of such companies. The company is a part of ACE Micromatic Group, the largest manufacturer of metal-working equipment in India, and is based in Bangalore, Karnataka (the city is called “Indian Silicon Valley” due to a large number of IT companies located in the city). The company produces one third of all machine tools manufactured in India. Annual volume of production is 4,000 machines. The company plans to increase this number to 10,000 units in the next four years.

Mr Srinivas Shurgurkar, the MD of the company, took us around the plant: all processes from cutting the sheeted steel to grinding and testing are fully automated; the operator only has to monitor the process on a computer screen. The Director honestly admits: quality of their production is at the level of Korean and Japanese machines (first place still belongs to the European makes), but prices are at the level of Taiwan. The company has supplied and installed about 33,000 CNC turning centers and grinding machines around the world, the machines are mainly used in defense and transport sectors. Our country has about 100 machines from this company as of now: the company started working with Russia only eight years back. The company mainly supplies its components to the Perm Company called Ural-Instrument-Pumori, where the high-tech machines are assembled using local components and then supplied to their customers. The company will present the latest Russian-Indian CNC machine at INNOPROM.

One more Indian company that is participating in INNOPROM, Walchlandnagar Industries Limited from Pune (Maharashtra, the leading industrial state of India) supplies turnkey plants. The company’s portfolio includes hundreds of exported plants: more than 80 sugar plants and more than 100 cement plants. However, the idea of “customized plant” does not seem to very popular in Russia, Russian customers are more interested in setting up joint-stock enterprises for joint production for defense, nuclear and aerospace sectors. For instance, Atomenergomash supplies equipment for nuclear power plant Kudankulam and there are negotiations with Rosoboronexport.

India consists of 29 states and seven union territories. Common Russian people mostly know about the small resort state Goa and National Capital Territory of Delhi, however, INNOPROM will see industrial representatives from many more states. Among them is the leading industrial state Maharashtra with its administrative centre in Mumbai (earlier Bombay), the leading IT state Karnataka (capital – Bangalore, famous as Silicon Valley), Gujarat, Uttar-Pradesh and Punjab.