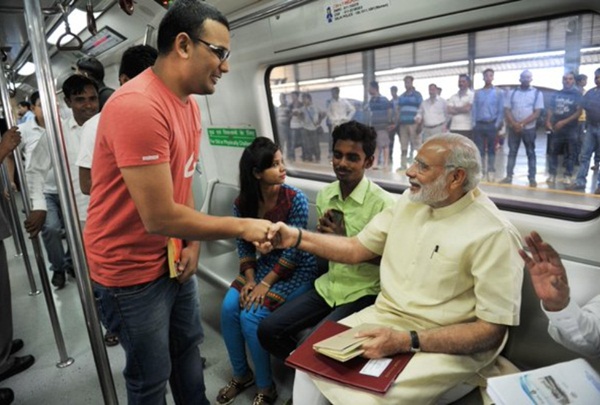 Country leaders are very proud of Delhi metro and are not averse to using it themselves. Last autumn it was Narendra Modi, the Prime Minister of India (right), who was seen riding the “tube”: this photo gathered 32 thousand likes on Instagram

EDITORIAL NOTE. In the run-up to Innoprom-2016, “OG” started publishing a series of stories devoted to the major partner of this event – India. Just shortly before the exhibition, our reporter visited three Indian states. Our first stories of the series told you about industrial enterprises and industrial parks of India and explored the life in this country through the eyes of a tourist (in issues published on 5th, 6th and 8th of July). Our last story is about Delhi metro system.

There was a time when Indian metro builders went to Moscow to learn from their Russian colleagues, however now they also have a lot of their own experience to share. Delhi metro is setting records in terms of construction time, levels of passenger safety and travel cost. How did they manage to do this?